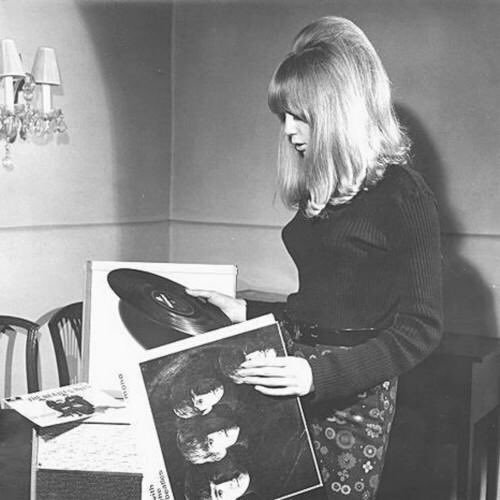 Bonus Track
15. Guy Lombardo Orchestra: Smoke Gets In Your Eyes

And Now for The Particulars

This was originally issued on Decca 2615 as a “Fox Trot with vocal chorus by Louis Armstrong”.

Lead singer Guy Harvey was born in Port-Alfred, Quebec in 1941. He began his music career in 1961 with the group Kambo, who would later become the Les Gendarmes in August 1965. Guy lead the group for three years.  They broke up at the end of 1968. Guy Harvey recorded some solo singles in 1969, and he continued to perform in piano bars. He was still performing in the early 2000s.

The undisputed King of Zydeco by the man who basically invented the genre by getting his brother to play the all metal washboard vest to define it. The two together were all that was required: accordion and frottoir (rub board), but here they add a drummer.

He contends that one of his proudest achievements in his 35 yr career is having his songs in ‘French Canada’ re-recorded by lots of French-Canadian players. Originally a guitar player, he began taking up the single row accordion in 1978. They’re the only Cajun music band that I know of that have no guitar player.

Recorded October 23, 1966 April 4, 1967, at De Lane Lea, CBS, and Olympic Studios in London.  In honor of his Cherokee heritage, Hendrix dedicated the song to the American First Nations and other minority groups.

I got to know this wacky guitar player and turned him on to the music of Syd Barrett and let him go wild. A couple of years later he formed this band and brought them into our CIUT Studio 3 when we were still at 91 St. George Street. It was a basement studio with brick walls. We did two sessions and this was from the first one in 2007. Live with no overdubs.

Murray McLauchlan’s backup band was called The Silver Tractors (didn’t matter who was in it). They were mostly Toronto based musicians like Ben Mink (kd lang), David Wilcox and Dennis Pendrith. By the late 70s, Murray was the number one artist on the True North Records label, out-selling records by label-mate Bruce Cockburn and winning several Juno Awards in the process. Songs like ‘Down By The Henry Moore’, ‘The Farmer’s Song’, ‘On The Boulevard’ and ‘Sweeping the Spotlight Away’ were major hits in Canada.

Joe recorded three albums for Stompin’ Tom’s ‘Boot Records’ label. Let’s Party was the third offering. The cover was a highly controversial painting by Joe of a cigarette smoking party where all the individuals were portrayed with anus heads and cigarette hands (with teeth) which was quite revolutionary cover for a country music label. The album is one of the strongest, best produced records of Joe’s career with several memorable songs and a great cast of musicians.

This band consisted of family and friends from Perth County, Ontario. They released two decent albums in the 1970s of a variety of styles, from fiddle tunes to Cajun music, kids songs and blues. The drum solo on this song was by Jimi Kell who was just 11 at the time. They signed with MCA for their next album release in 1974, produced by Gary Buck, but it failed to chart so they broke up the band.

The sixth studio album by King Crimson is probably the most esoterically strange. Without enough material to produce an album, the band recorded live improvs and blended them into a studio album featuring only four songs with lyrics. Lament" is about fame. The phrase "Starless and Bible Black" is a quotation from the first two lines of poet Dylan Thomas's play, Under Milk Wood.

Do you remember when stores and restaurants used to have these signs: No Shoes, No Shirt, No Service? One of the first times I saw one was in a downtown deli in Los Angeles after midnight in the sleaziest part of town.

Merritt had a series of albums in the ’80s, working with Daniel Lanois and avant-garde musicians from New York City. That was where he learned about special sounds and how they can help prop up a song, making it sound unique., He has employed these methods carefully, producing albums by artists such as Tannis Slimmon (Oak Lake), Fred Eaglesmith, Fearing And White, The Rheostatics and Grievous Angels.

He came from a family of Métis fiddlers and began playing at age 15 and went on to define the Red River style of fiddle playing. He played on Winnipeg radio accompanied by the musical group the Red River Mates. He moved to Vancouver and later to Montreal where he appeared on the television program Don Messer's Jubilee. It was his rendition of an old Métis fiddle tune, The Red River Jig, that he is best known for.

The most controversial recording that Gordon Lightfoot ever released was ‘Black Day In July’. The 1967 Detroit Riot, also known as the Detroit Rebellion and the 12th Street Riot, was the bloodiest incident in the "Long, hot summer of 1967". Gordon Lightfoot wrote and recorded it, recounting these events on his 1968 album Did She Mention My Name?. This song was subsequently banned by radio stations in 30 American states, including Michigan. The ironic thing about the ban was that most young, hip music listeners in Detroit tuned into Canadian radio station CKLW, which was a powerful 50,000-watt station beaming into the US. They were playing the song a lot.

Others songs about the riots were the 1967 song "The Motor City Is Burning" by John Lee Hooker, which was also recorded by the MC5 on their 1969 album Kick Out the Jams; "Panic in Detroit", from David Bowie's 1973 album Aladdin Sane; The Temptations' 1970 single "Ball of Confusion (That's What The World Is Today)";  Marvin Gaye's "What's Happening Brother" from his 1971 album What's Going On?

Originally released on the album of the same name, the theme being commercialism, which probably didn’t help the band in the singles game. While the album went on to sell well, the two singles the album produced failed to light up the charts, including Crown of Creation.

The Characters first single featured 'Tell Me', a fast paced, exciting number reflecting the mersey-beat era and was written in just 5 minutes by Gilbert M Rozon. The track was laid down in 3 takes and it became the Character's signature hit song for 1966.

The flip side 'There's Always Time for Love' is reminiscent of early 'Staccatos' material flavoured with a 'Canadian Classics' beat style. The original track ran 4min, 33 secs, but the producers (Vern Craig, Les Emmerson and Sandy Gardiner) all said it needed to be cut down to under 3 minutes. So two verses, a chorus, a bridge, intro to chorus and fade were all chopped, which meant half the meaning of the song was left out.

Cashman-Pistilli composition "Sunday Will Never Be the Same", a #9 hit on the Billboard Hot 100 for Spanky and Our Gang. Cashman successfully produced Jim Croce’s albums in the 70s. Tommy West became a session singer and sang back-up vocals on albums by Frank Sinatra, Perry Como, Sammy Davis, Jr., Connie Francis, and Mitch Ryder.

Collins began his music career playing accordion in a country band in Southern Ontario before moving north to Sudbury.  He wrote a lot of songs about the North. He only put out a couple of albums but was best known for his song ‘The Little Skidoo’ which he wrote for his own kids (although they never actually owned a Ski-doo) in 1967. He didn’t record it until 1976. He worked at the Ministry of Transportation for 35 years before retiring in 1988.

This was a huge Buck Owens’ hit in 1963 that greatly influenced the Beatles. It was released as the B side of Yesterday Sept 1965 with Ringo singing lead. The song  became a live performance favourite both with the Beatles and later with Ringo Starr & His All-Starr Band. Owens and Starr went on to record a duet version of it in 1989.

In Canada we got this song on Beatles VI but in Britain it was released on Help. They recorded it along with another Williams tune that Lennon sang, "Bad Boy", on the same day: May 10, 1965

Just like Yesterday, it’s only Paul. That was all it needed.

Until the release of Revolver, Harrison often had difficulty getting the band to record his songs.  Most Beatles albums contained a couple of George’s songs but three of his songs appear on Revolver from which the claim: "The album on which Harrison came of age as a songwriter". The other two songs were lead off number “Taxman” and the raga influenced “Love You To”

"Free as a Bird" is a song originally composed and recorded in 1977 as a home demo by John Lennon. In 1995 a studio version of the recording, incorporating contributions from Paul McCartney, George Harrison and Ringo Starr, was released as a single by the Beatles, 25 years after their break-up. The single was released as part of the promotion for The Beatles Anthology video documentary and the band's Anthology 1 compilation album. For the Anthology project, McCartney asked Lennon's widow Yoko Ono for unreleased material by Lennon to which the three remaining ex-Beatles could contribute

As far as I’m concerned… David Celia is one of those guys who might be one of those guys who fall under that category of “one of the best unknown talents in town”. An excellent, tasty and unique guitarist who seems to coax just about any sound he wants out of his instrument. He creates a Beatlesque pop from his songs while remaining heavy enough to brand them his own. I’ve followed his career since the release of his first CD, watching him grow and just get even better. His 2015 album was released on vinyl, made in the UK and transported back to Canada in his luggage.

Cash was in a band (L’Etranger) with Charlie (Chuck) Angus in the early 80s before forming The Andrew Cash Band and signing to Island Records. Meanwhile, Angus started his own band, The Grievous Angels, in 1987 and won election to the House of Commons in 2004. Later,  Andrew got elected and was a Member of Parliament (MP) from 2011 to 2015. This probably makes them the only two MPs ever elected that were in the same punk band together.

Crash Vegas formed in 1988 and disbanded in 1996. They were the brainchild of Michelle McAdorey and Blue Rodeo’s Greg Keelor who, due to Blue Rodeo commitments, left the band and was replaced by Colin Cripps. Jocelyne Chantal Lanois is a Canadian musician, bass player and songwriter from Hull, Quebec, who has been a member of the bands Martha and the Muffins and Crash Vegas. She has also had touring stints as bass player with Ani DiFranco and Chris Whitley, and played on Sarah McLachlan's album Solace. She is the sister of record producer Daniel Lanois. Lanois left the band on acrimonious terms after the release of Red Earth and their label Risque Disque went bankrupt, leaving the band in limbo. McAdorey was the niece of the late Canadian television and radio personality Bob McAdorey. She now lives near Peterborough and recently released a new album.

Inducted into the Grammy Award Hall of Fame 1985