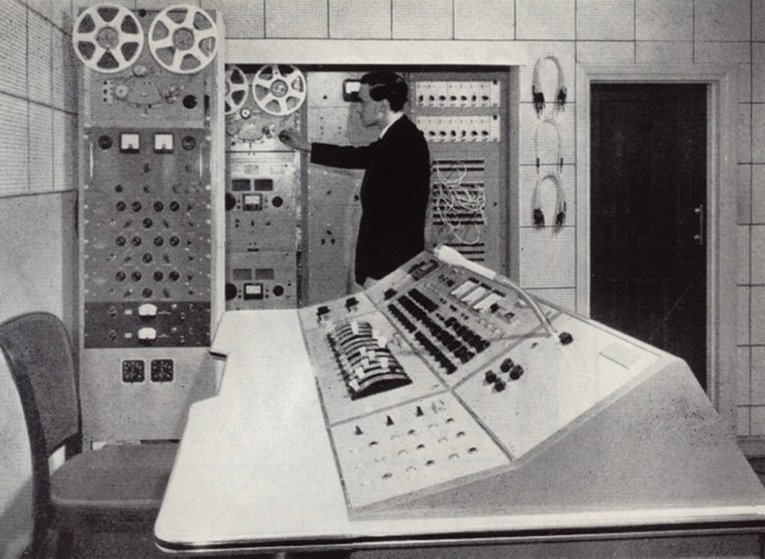 And Now for The Particulars

The band’s biggest hit was In-A-Gadda-Da-Vida. Bushy claimed: “I came home late one night and Doug [Ingle] had been drinking a whole gallon of Red Mountain wine. I asked him what he had done and listened to him playing a slow ballad on his Vox keyboard. It was hard to understand him because he was so drunk … so I wrote it down on a napkin exactly how it sounded phonetically to me: ‘In-A-Gadda-Da-Vida.’ It was supposed to be ‘In the Garden of Eden.'”

Bushy’s drumming would go on to influence many of his peers. “Ringo [Starr] and Paul [McCartney] came to see us at Royal Albert Hall,” Bushy told a Rolling Stone reporter last year. “Ringo took me out to dinner and drinks and said to me, ‘I hope you don’t mind I stole a part of your drum solo’ in ‘In-A-Gadda-Da-Vida’ for the Abbey Road track “The End.” I told him not at all. ‘I take it as a compliment.'”

Formed in the early 1960s as Jay Smith and The Majestics, Smith shared lead vocals with Shawne Jackson (ex of The Silhouettes), and they soon became one of the leading big band groups around the Toronto area. After Smith left they became Shawne & Jay Jackson and The Majestics. The band were so good that Arc Records decided to record them performing instrumental soul and R&B hits. They put out three excellent albums.

Copperhead Road was an actual road near Mountain City, Tennessee, in an area known to locals as "Big Dry Run" although it has since been renamed Copperhead Hollow Road, owing to theft of road signs bearing the song's name. The album Copperhead Road was a break-through album for Earle, barely played on country music radio but becoming a favourite of the ‘Outlaw’ country rock crowd.

Ellis Island was the sophomore release by this Yorkville (Toronto) band featuring their new bass player, Brad Campbell, recruited from local Toronto band, The Last Words, after replacing Denny Gerrard. This was right after the band’s disastrous performance at the Monterey Pop Festival in 1967 when ‘everything that could go wrong, did go wrong’. Somehow I found this album to be a little a little disjointed, never finding that magical groove that had driven the band from Toronto to New York and Los Angeles, only to crash in debt and flames. The album was produced by Elliot Mazer who would later go on to work with Neil Young.

After the great success of their first album, In The Court of the Crimson King, singer / bass player Greg Lake left the band to join Emmerson, Lake & Palmer but not before he laid down his vocals for In The Wake of Poseidon. To replace him, Fripp and drummer Michael Giles asked Michael’s brother Peter to play bass. He had been the original bass player in Giles, Giles & Fripp just prior to the establishment of King Crimson.

The name "Queensrÿche" is written with a metal umlaut over the letter 'Y'. As the band later joked: "The umlaut over the 'y' has haunted us for years. We spent eleven years trying to explain how to pronounce it." The umlaut is used on all of Queensrÿche's releases, except for their 2011 album, Dedicated to Chaos.

It was nearly impossible for the original producers to make Syd Barrett’s two solo albums. It took David Gilmour and Rick Wright to pull this thing together with drummer Jerry Shirley. They would just let Syd sing and play his acoustic guitar and then try to add backup later and it sort of worked. The timing was all over the place, as were Syd’s chords and changes but it somehow worked, like on this song.

The Sopwith Camel was a British First World War single-seat biplane fighter aircraft introduced on the Western Front in 1917. The Sopwith Camel band formed in California in 1965. They were like a psychedelic jug band who scored one big hit song ‘Hello, Hello’ and were unable to follow up the success of their first album and disbanded later in 1967. They were label mates with the Lovin’ Spoonful and were produced by the same guys: Erik Jacobsen and Val Valentin.

Toronto-based “Gregory Childs & Heart Lung” came to life in late 2019 as an alt-country outfit focused on taking pop-country to a gnarlier place. Self-described as “emotionally confused Willie Nelson”, the band was actively playing The Cameron House, Monarch Tavern and other Toronto staples before COVID forced them to focus exclusively on recording.

Gregory Childs claimed in an interview: “As a group we’re all drawn to raw storytelling. While we respect the pop elements of both classic and contemporary country we want our songs to feel like the mics just happened to be there, with the imperfections, throat pulls and chair squeaks included. We definitely aren’t perfect and we like it that way.”

They recorded five albums during the years 1967–69, before disbanding inn 1970. Originally called The Electric Pigeons, they changed their name to The Pigeons. Ahmet Ertegun, their label's founder and president, didn't like that name and told them to change it.
Carmine Appice: We tried to think up a new name but were getting nowhere until we played a gig at the Page 2 club on Long Island and ended up talking to a chick named Dee Dee who worked there. She told us how her grandfather used to call her Vanilla Fudge. Then she looked at us and added 'Maybe you guys should call yourselves that---you're like white soul music'. We liked it. We told our manager, Phil Basile. He liked it. We told Atlantic and they liked it, too. So Vanilla Fudge it was".

According to Ritchie Blackmore and Jon Lord, Vanilla Fudge's organ-heavy sound was a large influence on the British band Deep Purple, with Blackmore even stating that his band wanted to be a "Vanilla Fudge clone" in its early years.

On March 14, 1970, Vanilla Fudge played a farewell concert at the Phil Basile's Action House. After that, Bogert & Appice departed to go ahead with another group, Cactus, that they'd been planning since late 1969. In 1972 they left Cactus and formed Beck, Bogert & Appice with guitarist Jeff Beck.

Daniel Lanois and his brother Bob set up their own recording studio in their mother’s basement in Hamilton in the 1970s producing mostly folk and bluegrass recordings. Then when punk blew in, they got a call from Brian Eno who wanted to book time in their studio; Daniel didn’t know who he was. It turned out to be an epiphany moment for both Eno and Lanois, totally changing Daniel’s attitude, resulting in co-productions of U2 and Bob Dylan. It wasn’t until 1989, however, that Daniel decided to make a solo record. On this track, Brian Eno did the haunting keys and backing vocals at his studio in UK

Lanois was invested in the Order of Canada in 2018.

Over the years The Sadies have put out records with other artists: Buffy St. Marie for one! Here’s a collaboration between Philadelphia’s Kurt Vile and the band which appears on their latest album, Northern Passages (vinyl!). The Sadies have since toured with Vile, performing all around the US.

Originally influenced by bands like Bruce Woolley and the Camera Club, David Bowie, Talking Heads, and Elvis Costello, Wilfred and his drummer Jamie used their basement Edmonton studios to self-produce their first album of original songs in 1986. They have since gone on to produce a dozen albums.

This was one of the most progressive bands in Toronto in 1972, partly inspired by Frank Zappa. You can hear that influence in many of the tracks on this, their only album. Partly produced by Bill Bryans who would go on to play with Parachute Club and Downchild Blues Band.

Released their first album in 1991. This is their 11th LP. It was given to me by Benet Walsh whom a met in a Ludlow pub. Walsh plays several instruments in various different bands, like Thistletown where he played bass. Also in an old time country band where he plays banjo. Check him out on twitter @TheBeeDrones

Two tracks by UFO that sort of blend into each other. UFO formed in London in August 1969.
Over a career spanning 49 years, UFO have released 22 studio albums, 14 live recordings, 16 compilation albums and one album of cover songs.

Peter Way was bass guitarist for the heavy metal band UFO from 1968 to 1982 and was also associated with  Ozzy Osbourne. Pete Way began his career as a studio musician before becoming a founding member of UFO. He died following life-threatening injuries he had sustained in an car accident. Way died just ten weeks after his former UFO bandmate and guitarist Paul Chapman, and one year after UFO keyboardist Paul Raymond.

From the late 1940s until he left in NYC 1972, he could often be found on 6th Avenue
between 52nd and 55th Street wearing a cloak and Viking-style helmet, sometimes busking or selling music, but often just standing silent and still. He was widely recognized as "the Viking of 6th Avenue"

Residents who had no idea that this seemingly homeless eccentric standing on
"Moondog's corner" was a respected and recorded composer and musician.

In 1947 Hardin had adopted the pen name "Moondog" in honor of a dog "who used to howl at the moon In 1954, he won a case in the New York State Supreme Court against disc jockey Alan Freed, who had branded his radio show, "The Moondog Rock and Roll Matinee", musicians such as Benny Goodman and Arturo Toscanini, testified that he was a serious composer. He moved to Germany in 1972. Invented many of the instruments he used in his recordings

Skylark formed from the ashes of one of Ronnie Hawkins' many back-up groups.  The Writing’s On The Wall was actually the B side of Wildflower which went to No. 1 in Canada and made Billboard magazine's Top-10. The single would go on to sell over a million copies. The band featured some prime players including David Foster and Donny Gerrard who did backing vocal work for Elton John, John Fogerty and Donna Summer. Bonny Cook was married to Foster for several years and went on to write the lyrics to theme songs for the TV shows like 'Night Heat'

Another Zappa produced double album that was issued on Zappa’s earlier imprint, Bizarre Records (issued by Reprise) was this one. Fischer was institutionalized at age 16 for attacking his mother with a knife. He was later diagnosed with two mental disorders, severe paranoid schizophrenia and bipolar disorder. Following his escape from the hospital, Fischer hung around Sunset Strip singing his songs, a cappella, for a dime. Discovered on the street by Frank Zappa, Fischer became an underground concert favorite. Some of the songs on the album were actually recorded live, on the streets. It’s an amazing look into the mind of this confused, unstable yet passionate songwriter.

During a career spanning from the 1950s to the 2000s, Koffman was one of Canada's most prolific musicians, working variously in clubs and sessions. With his 1957 record Cool and Hot Sax on the New York-based Jubilee label, Koffman became one of the first Canadian jazz musicians to record a full-length album. He recorded Swinging Shepherd Blues in 1957 which helped establish his reputation as a flautist and ranked him alongside Herbie Mann and other great influential jazz flute players. "Swinging Shepherd Blues" was a hit in the United States, reaching #23 on the Billboard pop chart.

He was appointed to the Order of Canada in 1993 and inducted into the Canadian Music Hall of Fame in 1997.

The duel lead guitar driven band were extremely popular in Europe in the early 70s. They were and inspiration to members of Iron Maiden and Thin Lizzy. While the band have continued to perform as an entity, only Andy Powell remains